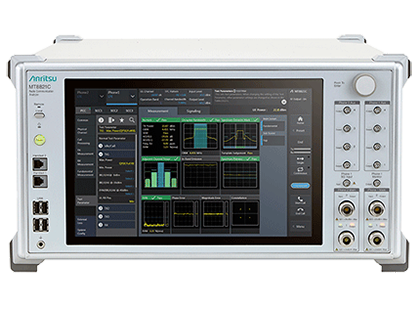 The MT8821C is an all-in-one tester with built-in LTE-Advanced terminal RF TRx test functions as well as base-station simulation functions; it has supported both DL CA 4CCs 4×4 MIMO and DL CA 5CCs 2x2MIMO until this new software release.

In addition, to facilitate a smooth transition to next-generation 5G communications systems targeted for service deployment in 2019, there are plans to introduce LTE-Advanced offering gigabit-class speeds by using even more CCs.

The MT8821C is an all-in-one tester with built-in RF TRx test functions and base-station simulation functions for LTE-Advanced terminals; it supports tests of TRx characteristics while the terminal is communicating.

In addition, since the MT8821C can control the terminal by signaling it supports measurements directly without changes depending on the chipset, which cuts measurement environment setup costs.