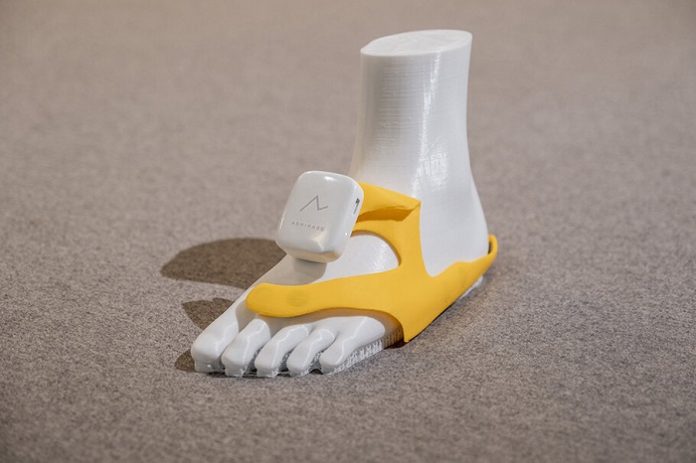 Honda has announced on its News Room website the establishment of a startup called Ashirase, Inc.— the first new business venture to originate from the company’s IGNITION program. Ashirase will produce an in-shoes navigation system to help people with low vision navigate in public spaces.

Honda announced last month that it was starting the IGNITION program as a way to help its employees commercialize ideas they have for new consumer products. Ashirase will be headed by Wataru Chino, who came up with the idea for a new navigational device after his visually impaired grandmother-in-law was killed when she slipped and fell down an embankment while out walking. He used his experience as a research and development engineer on automated driving applications to design a new assistance device for visually impaired pedestrians.

The new device, which has the same name as the company, has two main parts. One part fits inside the shoe and has vibrating pods along a length of fabric; the other part sits on top of the shoe and holds circuitry to run navigation applications and a battery to power the vibrating pods. The device works by combing data from GPS with maps that plot out a destination. As the person walks, they are instructed to turn by vibrations in the left or right shoe or told to stop (such as at an intersection) with vibrations in front of both shoes. The device can be fitted onto a wide variety of standard shoes.

Chino notes on the announcement page that the device is meant for visually impaired people, not those who are blind. He also notes that the device was designed to complement other visual aids, such as a white cane, while at the same time not serving as a distraction. Since it is not based on sound, the wearer can still listen to environmental cues such as cars honking, or people talking. Honda expects a device to be made for sale by 2022, and when it does it will come with a subscription service. Chino notes that Honda is only footing part of the startup expenses—the company still needs investors to add another 130 million Yen before the project can get off the ground