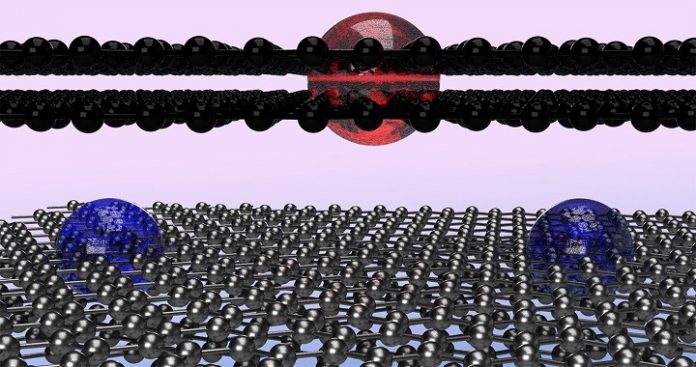 In 2018, physicists showed that something interesting happens when two sheets of the nanomaterial Graphene are placed on top of each other. When one layer is rotated to a “magic angle” of around 1.1 degrees with respect to the other, the system becomes a superconductor—meaning it conducts electricity with zero resistance.

Even more exciting, there was evidence that it was an unconventional form of superconductivity—a type that can happen at temperatures well above absolute zero, where most superconducting materials function.

Since the initial discovery, researchers have been working to understand this exotic state of matter. Now, a research team led by Brown University physicists has found a new way to precisely probe the nature of the superconducting state in magic-angle Graphene. The technique enables researchers to manipulate the repulsive force between elections—the Coulomb interaction—in the system.

In a study, the researchers show that magic-angle superconductivity grows more robust when Coulomb interaction is reduced, an important piece of information in understanding how this superconductor works.

“This is the first time anyone has demonstrated that you can directly manipulate the strength of Coulomb interaction in a strongly correlated electronic system,” said Jia Li, an assistant professor of physics at Brown and corresponding author of the research.

“Superconductivity is driven by the interactions between electrons, so when we can manipulate that interaction, it tells us something really important about that system. In this case, demonstrating that weaker Coulomb interaction strengthens superconductivity provides an important new theoretical constraint on this system.”

The original 2018 finding of potentially unconventional superconductivity in magic-angle Graphene generated significant interest in the physics community. Graphene—one-atom-thick sheets of carbon—is a relatively simple material. If it did indeed support unconventional superconductivity, graphene’s simplicity would make it an ideal place to explore how the phenomenon works, Li says.

“Unconventional superconductors are exciting because of their high transition temperature and potential applications in quantum computers, lossless power grids and elsewhere,” Li said. “But we still don’t have a microscopic theory for how they work.

That’s why everybody was so excited when something that looked like unconventional superconductivity was happening in magic-angle graphene. Its simple chemical composition and tunability in the twist angle promise a clearer picture.”

Conventional superconductivity was first explained in the 1950s by a group of physicists that included longtime Brown professor and Nobel Prize winner Leon Cooper. They showed that electrons in a superconductor distort the atomic lattice of a material in a way that causes the electron to form quantum duos called Cooper pairs, which are able to move through that material unimpeded.

In unconventional superconductors, electron pairs form in a way that is thought to be a bit different from the Cooper mechanism, but scientists don’t yet know what that mechanism is.

For this new study, Li and his colleagues came up with a way to use Coulomb interaction to probe electron pairing in magic-angle graphene. Cooper pairing locks electrons together at a specific distance from each other. That pairing competes with the Coulomb interaction, which is trying to push the electrons apart.

If it were possible to weaken the Coulomb interaction, Cooper pairs should in theory become more strongly coupled, making the superconducting state more robust. That would provide clues about whether the Cooper mechanism was happening in the system.

To manipulate the Coulomb interaction for this study, the researchers built a device that brings a sheet of magic-angle graphene in very close proximity to another type of graphene sheet called a Bernal bilayer. Because the two layers are so thin and so close together, electrons in the magic-angle sample become ever so slightly attracted to positively charged regions in the Bernal layer.

That attraction between layers effectively weakens the Coulomb interaction felt between electrons within the magic-angle sample, a phenomenon the researchers call Coulomb screening.

One attribute of the Bernal layer made it particularly useful in this research. The Bernal layer can be switched between a conductor to an insulator by altering a voltage applied perpendicularly to the layer. The Coulomb screening effect only happens when the Bernal layer is in the conducting phase.

So, by switching between conducting and insulating and observing corresponding changes in superconductivity, the researchers could ensure what they were seeing was due to Coulomb screening.

The work showed that the superconducting phase became stronger when the Coulomb interaction was weakened. The temperature at which the phase broke down became higher and was more robust to magnetic fields, which disrupt superconductors.

Li said the results are a credit to Xiaoxue Liu, a postdoctoral researcher at Brown and the study’s lead author, who built the device that made the findings possible.

“Nobody has ever built anything like this before,” Li said. “Everything had to be incredibly precise down to the nanometer scale, from the twist angle of the graphene to the spacing between layers. Xiaoxue really did an amazing job. We also benefitted from the theoretical guidance of Oskar Vafek, a theoretical physicist from Florida State University.”

While this study provides a critical new piece of information about magic-angle graphene, there’s much more than the technique could reveal. For example, this first study only looked at one part of the phase space for magic-angle superconductivity. It’s possible, Li says, that the behavior of the superconducting phase varies in different parts of the phase space, and further research will unveil it.

“The ability to screen the Coulomb interaction gives us a new experimental knob to turn in helping to understand these quantum phenomena,” Li said. “This method can be used with any two-dimensional material, so I think this method will be useful in helping to engineer new types of materials.”