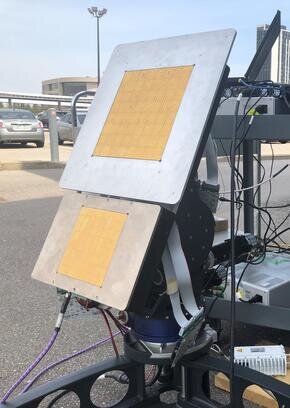 An intelligent antenna developed by researchers at Waterloo Engineering has been successfully tested, a major milestone in a multi-year, multi-million-dollar project.

The phased array antenna system for next-generation communications can be electronically steered to maintain links to overhead satellites for Internet connectivity.

The breakthrough was announced this week by C-COM Satellite Systems, a leading provider of mobile satellite antenna systems that are jointly funding the research with the Natural Sciences and Engineering Research Council (NSERC) of Canada.

Operating on the Ka-band, the low-cost technology was used in tests to stream video, surf the Internet, perform speed tests, and conduct an uninterrupted video conference over Webex.

C-COM, which is based in Ottawa, was co-founded by Leslie Klein, a Waterloo Engineering alumnus who serves as president and CEO.

Safavi-Naeini has been working on intelligent antenna systems for satellite-based Internet connectivity for almost two and a half decades, motivated by their potential to deliver broadband service via satellite to moving vehicles and bridge the digital divide by extending the reach of broadband Internet to vast areas of the world that lack access.

“Measured over-the-air results have demonstrated the high performance of the compact, scalable antenna modules and validated our modular technology architecture for larger panels,” he said.

Successful initial tests over the Telesat Anik F3 satellite are a significant development for C-COM and CIARS. Researchers will now continue testing over several different satellites to confirm the interoperability of the new antenna and radio system.

“Today, we are much closer to achieving our objective of delivering an affordable, electronically steerable antenna system capable of operating over the latest constellations of LEO, MEO, and GEO satellites, which will play a significant role in delivering broadband solutions to consumer and enterprise markets worldwide,” Klein said in a media release.