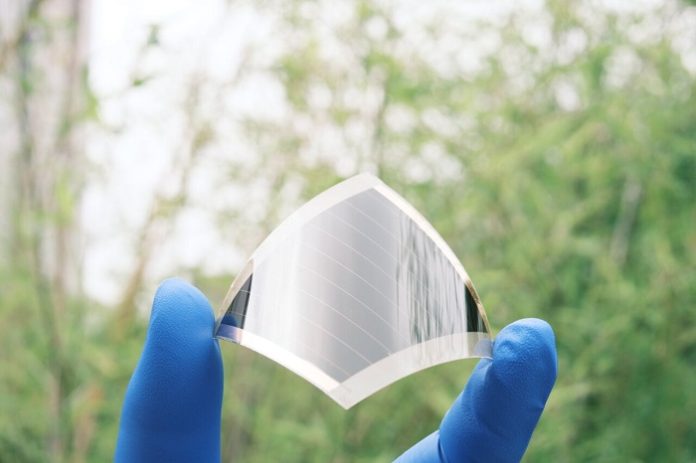 Lightweight and flexible perovskite are auspicious materials for the fabrication of photovoltaics. So far, however, their highest reported efficiencies have been around 20%, which is considerably lower than those of rigid perovskites (25.7%).

Researchers at Nanjing University, Jilin University, Shanghai Tech University, and East China Normal University have recently introduced a new strategy to develop more efficient solar cells based on flexible perovskites. This strategy entails the use of two hole-selective molecules based on carbazole cores and phosphonic acid anchoring groups to bridge the perovskite with a low temperature-processed NiO nanocrystal film.

“We believe that lightweight flexible perovskite solar cells are promising for building integrated photovoltaics, wearable electronics, portable energy systems, and aerospace applications,” Hairen Tan, one of the researchers who carried out the study, told TechXplore. “However, their highest certified efficiency of 19.9% lags behind their rigid counterparts (highest 25.7%), mainly due to defective interfaces at charge-selective contacts with perovskites atop.”

“Our work builds on our previous works on rigid all-perovskite tandem solar cells,” Tan explained. “Its primary objective was to achieve flexible thin-film solar cells with a PCE as high as that of their rigid counterparts.”

The flexible and all-perovskite tandem solar cells devised by the researchers have a carefully studied design and composition. When their frontal cell, comprised of a perovskite film with a wide bandgap, is illuminated by the sun, it absorbs high-energy photons. On the other hand, its posterior cell absorbs low-energy photons passing through the anterior cell.

Tan and his colleagues used a mixture of two hole-selective molecules based on carbazole cores and phosphonic acid anchoring groups to form a self-assembled monolayer (SAM). Their experiments showed that the SAM molecules could not be directly applied to ITO-coated flexible PET substrates in the flexible solar cells, as they led to a severe shunting of the solar cells.

“Our new strategy leads to record-performing flexible solar cells and represents a significant step toward the fabrication of flexible photovoltaics in the future,” Tan said. “We also showed that mixing two SAMs (2PACz and MeO-2PACz) with different dipole moments can flexibly tune the energy levels of HTL and therefore enables a better energetic alignment with the perovskite absorber layer. This significantly enhances the hole extraction efficiency.”

In initial tests, the solar cells devised by this team of researchers achieved a remarkable efficiency of 24.7%, which had never been reported before for any type of flexible and thin film-based solar cells. Tan and his colleagues also showed that the careful design of molecule-based interfaces to bridge hole-transport layers and perovskite films can significantly improve the bending durability of the solar cells, allowing them to retain their initial performance for over 10,000 operations cycles, bending at a radius of 15 mm.

“The HTLs based on SAMs are emerging as a hot topic in the perovskite community recently, and our approach opens a new way of using SAM molecules for more efficient perovskite solar cells,” Tan added. “We will now further reduce the interfacial losses of other interfaces in flexible all-perovskite tandem solar cells to achieve higher efficiency. In addition, we are working on the fabrication of flexible all-perovskite tandem modules.”