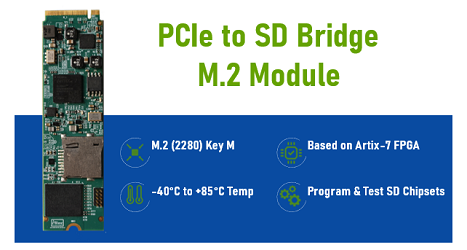 M.2, an evolutionary form factor sweeping the world of performance PCs is designed for product manufacturers to replace a variety of specific devices for space-constrained applications. Many M.2 modules utilize the Peripheral Component Interconnect Express interface or PCIe bus for data communication.

Due to low latency and low software stack overhead, it has become a prime choice of 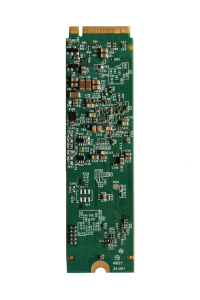 interface in desktops, laptops, in large data centers, and also found usage in the internet of things (IoT) & automotive. Furthermore, the PCIe interface features a smaller physical footprint and can handle data transmission up to four lanes. As a result, one gets faster read/to write speeds.

iWave’s PCIe to SD M.2 module is based on Artix-7 FPGA that provides bridging features between PCIe and SD3.0 units to validate different memory densities of micro-SD cards. For host processor communication, the module is designed with 2-Lane PCIe Gen 2.0 interfaces. The module presents a compact design, and flexibility, and consumes low power. Since PCIe is backward compatible with the earlier version, the user can integrate it into existing systems with ease. The interface towards the SD card is realized by the SD protocol implemented in the FPGA.

An advantage of using FPGAs is the ability to implement proven intellectual property to complete bridging functions quickly and with confidence.

The extremely thin and light M.2 interface is available in M.2 2280-M key form factor and is compliant with SD 3.0 standard specifications. It supports both standard and high-capacity SD operations and can handle data rates up to SDR 104/UHS-1. Compact in size, this robust module can operate at temperatures ranging from -40°C to +85°C and consumes very less power. The M.2 module is 22 mm wide and 80 mm long.

The key features of PCIe to SD bridge include

The module can also be used as an IP validation platform to test PCIe to SD bridge functionality. The module can be used as a development kit for programming and testing new SD chipsets to comply with the specifications. Super simple to install, the M.2 module requires no cabling for routing, and an x2 PCIe interface to support the M.2 module offers increased performance with reduced latency.

iWave also offers a comprehensive ecosystem around the M.2 module with good technical support for hardware, software, and FPGA for the customer to quickly get started with the development of their product and solution.