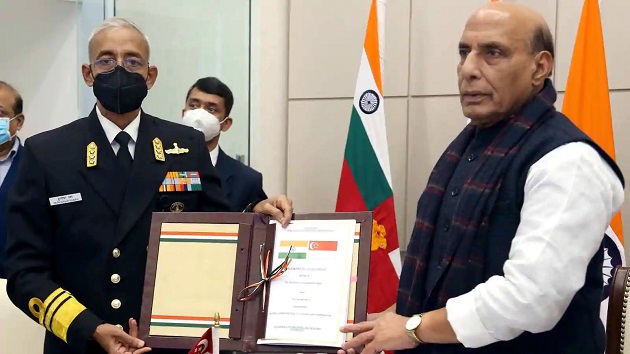 Defence ministers of India and Singapore held a dialogue virtually wherein the navies of the two countries signed an implementing agreement on submarine rescue support and cooperation, according to an official statement.

Rajnath Singh and his Singaporean counterpart Ng Eng Hen conveyed their full support towards the early conclusion of agreements to “facilitate the conduct of live firings and to establish reciprocal arrangements for the cross-attendance of military courses”, said the joint statement issued after the fifth Defence Ministers’ Dialogue.

“Both ministers were pleased to witness the signing of the implementing agreement on submarine rescue support and cooperation between the two navies,” it noted.

After the dialogue, Singh said on Twitter that it was a productive meeting with Hen and India is fortunate to have a defence partner like Singapore.

“Today’s interaction will benefit both countries on many bilateral issues that are being pursued to further strengthen our special relationship,” Singh said.

The joint statement issued after the fifth Defence Ministers’ Dialogue stated that defence and security engagements between the two countries have broadened significantly in scale and scope across all three services of the armed forces, defence industry and technology.

“Both countries have also found common ground on multilateral fora and engagements. The cyber agencies of both armed forces have also stepped up engagements,” according to the statement.

During the dialogue, both ministers exchanged views on the impact of the COVID-19 pandemic on the defence and security engagements, including the best practices adopted by their armed forces.

According to the statement, Singh conveyed gratitude to the Singapore armed forces for their role in supporting foreign workers, many of whom were Indian nationals, at the peak of the pandemic.

He also complimented India’s successes in bringing down the overall number of COVID-infected persons despite challenges of scale in terms of geography and population, the statement said.

“Both ministers were committed to further enhance bilateral defence ties between India and Singapore and supported multilateral initiatives to promote lasting peace and stability in the region,” it added.