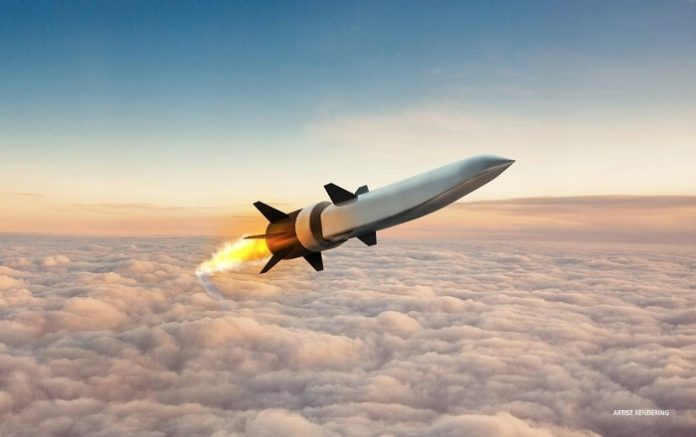 DARPA, in partnership with the U.S. Air Force, completed a free-flight test of its Hypersonic Air-breathing Weapon Concept (HAWC) last week. The missile, built by Raytheon Technologies, was released from an aircraft seconds before its Northrop Grumman scramjet (supersonic combustion ramjet) engine kicked on. The engine compressed incoming air mixed with its hydrocarbon fuel and began igniting that fast-moving airflow mixture, propelling the cruiser at a speed greater than Mach 5 (five times the speed of sound).

The HAWC vehicle operates best in oxygen-rich atmosphere, where speed and maneuverability make it difficult to detect in a timely way. It could strike targets much more quickly than subsonic missiles and has significant kinetic energy even without high explosives.

“The HAWC free flight test was a successful demonstration of the capabilities that will make hypersonic cruise missiles a highly effective tool for our warfighters,” said Andrew “Tippy” Knoedler, HAWC program manager in DARPA’s Tactical Technology Office. “This brings us one step closer to transitioning HAWC to a program of record that offers next generation capability to the U.S military.”

Goals of the mission were: vehicle integration and release sequence, safe separation from the launch aircraft, booster ignition and boost, booster separation and engine ignition, and cruise. All primary test objectives were met.

The achievement builds on pioneering scramjet projects, including work on the X-30 National Aero-Space Plane as well as unmanned flights of NASA’s X-43 vehicles and the U.S. Air Force’s X-51 Waverider.

“HAWC’s successful free flight test is the culmination of years of successful government and industry partnership, where a single, purpose-driven team accomplished an extremely challenging goal through intense collaboration,” Knoedler added. “This historic flight would not have been possible without the dedication of industry, U.S. Air Force, and Navy flight test personnel who persevered through the pandemic to make the magic happen.”

The HAWC flight test data will help validate affordable system designs and manufacturing approaches that will field air-breathing hypersonic missiles to our warfighters in the near future.