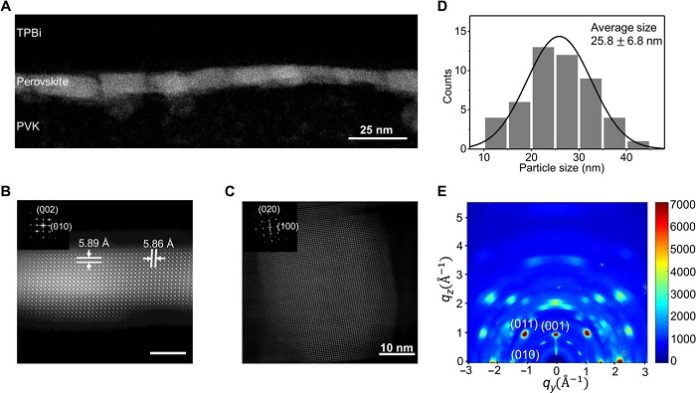 Planar perovskite light-emitting diodes (LEDs) are high-performance and cost-effective electroluminescence devices that are ideal for large-area display and lighting applications. By exploring the emission layers with high ratios of horizontal transition dipole moments (TDMs), researchers can boost the photon outcoupling of planar LEDs. The LEDs that are based on anisotropic perovskite are inefficient due to the challenges of regulating the orientations of TDMs as well as the difficulties of achieving high photoluminescence quantum yields, including challenges of realizing charge balance in the films of assembled nanostructures. In this work, Jieyuan Cui and a research team in chemistry, materials science and optics in China, showed efficient electroluminescence emanating from an in-situ perovskite film made of a monolayer of nanoplatelets. The team achieved LEDs with a peak external quantum efficiency (EQE) of 23.6 percent to represent highly efficient planar perovskite LEDs.

Based on further experiments, the team showed how the introduction of lithium bromide (LiBr) in the precursor solution improved the photoluminescence quantum properties of the film. Additionally, the electroluminescence spectrum of the perovskite nanoplatelet film indicated ultrapure green emissions and the pin-hole free morphology of the nanoplatelet film allowed negligible current leakage. When they performed optical simulations on the materials by using the classical dipole model developed for planar microcavities, the results indicated high-outcoupling efficiency of 31.1 percent for the perovskite devices based on the orientation of the nanoplatelet film. While previous work aimed to control the orientations of transition dipole moments by focusing on the assembly of anisotropic colloidal nanostructures, high-efficiency electroluminescence required the syntheses of anisotropic colloidal nanostructures with high quantum yield. The potential to fulfill the device requirements were challenging due to material design and assembly requirements.

In this way, Jieyuan Cui and colleagues showed how the orientation of transition dipole moments of perovskite films could be regulated to overcome the limits of light-outcoupling of planar LEDs to form green LEDs with exceptionally high external quantum efficiency of up to 23.6 percent. The chemical versatility of the perovskite materials allowed Cui et al. to extend the facile approach to in situ grown nanoplatelet films to develop differently colored LEDs with high external quantum efficiency. The work describes a simple and effective method to understand the role of the anisotropic optical properties of nanostructures in the formation of optoelectronic devices.