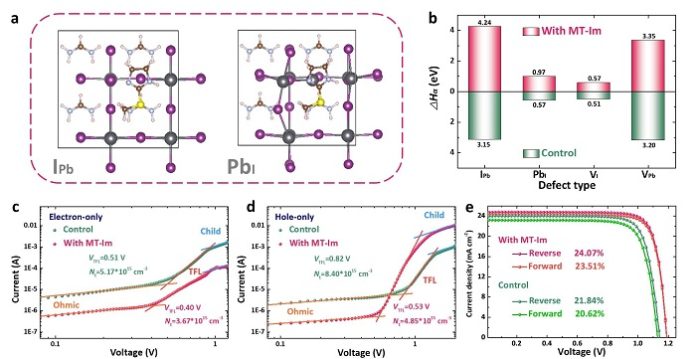 Organic-inorganic halide perovskite materials have excellent optical capture capacity and carrier conductivity. Perovskite solar cells, with amazing power conversion efficiency, show great application prospects. However, a large number of unfavorable defects, growing up after or during the annealing process due to their ionic nature, would lead to sites of nonradiative recombination and accelerate the degradation of device efficiency and stability.

They found that the new perovskite, due to its amphoteric properties and strong molecular interaction, was able to deal with different surface-terminating ends and exhibited a variety of passivation effects.

According to the theoretical calculation of defect formation energy, the formation of lead-based defects was effectively inhibited. The modified perovskite solar cells displayed reduced defect density and lowered nonradiative recombination, thereby resulting in a power conversion efficiency of over 24%. In addition, the long-term stability against humidity, high temperature, and light was improved.