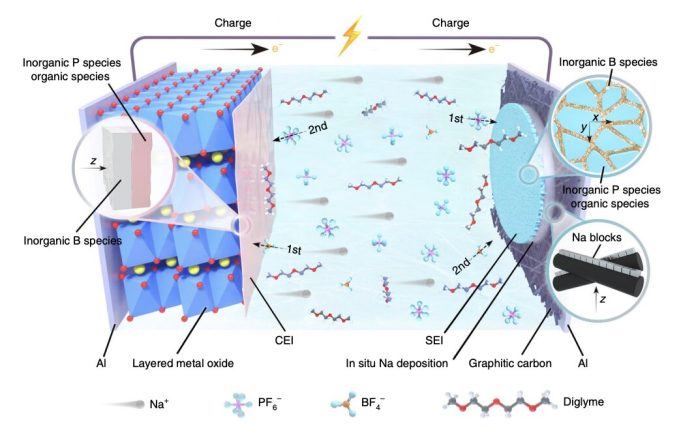 In recent years, engineers worldwide have been trying to devise new batteries and energy storage technologies that are more sustainable and cost-effective. One of the solutions attracting particular interest is sodium-based battery technology.

Sodium-ion batteries could have numerous advantages over conventional and widely used lithium-based batteries. Most notably, as sodium is abundant on our planet and can be easily sourced, it could be affordable and easy to produce on a large-scale.

Researchers at the Chinese Academy of Sciences, HiNa Battery Technology Co., the Yangtze River Delta Physics Research Center, and the Tianmu Lake Institute of Advanced Energy Storage Technologies have recently introduced a design strategy to achieve sodium-ion batteries with higher energy densities. The introduction of a graphitic carbon coating inside the batteries, specifically on the aluminum current collector.

“We report an initial anode-free Na battery with an energy density of over 200 Wh kg-1, which is even higher than that of the commercial LiFePO4||graphite battery,” the researchers wrote in their paper. “Through introducing graphitic carbon coating on the Al current collector and boron-containing electrolytes in the battery, we show that uniform nucleation and robust interphases enable reversible and crack-free Na deposition.”

The researchers used their design strategy to fabricate anode-free sodium batteries. These batteries were fabricated using an interfacial engineering method, and each included a boron-based electrolyte, a graphite current collector, and a layered oxide cathode.

They then evaluated their batteries in a series of tests and found that they had remarkable energy densities when compared to other sodium-based battery technology. In addition, their batteries had a long cycle lifetime, which suggests that they could reliably operate for long periods of time.

“Benefitting from the synergetic effects derived from the built cooperative interfaces, the cycling lifetime of the Na battery without applying additional pressure reaches 260 cycles, which is the longest life for large-size cells with zero excess Na,” the researchers added. “The insights gained from the Na plating/stripping behavior and interfacial chemistry in this work pave the way for further development of Na batteries with even higher performance.”

The initial results gathered by this team of researchers highlight the promise of their design for creating a sodium-based battery that could be introduced on a large scale in real-world settings. In the future, they could inspire other teams to test similar design strategies, ultimately paving the way toward the fabrication of new and implementable sodium-ion battery solutions.