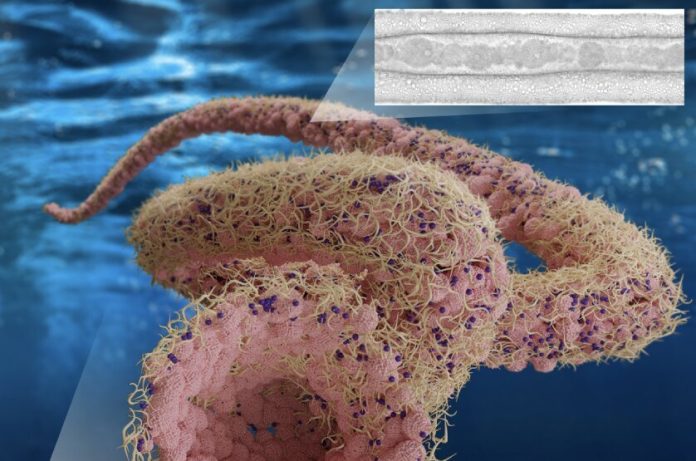 In recent years, roboticists have developed a wide variety of robotic systems with different body structures and capabilities. Most of these robots are either made of hard materials, such as metals, or soft materials, such as silicon and rubbery materials.

Researchers at Hong Kong University (HKU) and Lawrence Berkeley National Laboratory have recently created Aquabots, a new class of soft robots that are predominantly made of liquids. As most biological systems are predominantly made up of water or other aqueous solutions, the new robots could have highly valuable biomedical and environmental applications.

“We have been engaged in the development of adaptive interfacial assemblies of materials at the oil-water and water-water interface using nanoparticles and polyelectrolytes,” Ho Cheung (Anderson) Shum, Thomas P. Russell, and Shipei Zhu told. “Our idea was to assemble the materials that the interface and the assemblies lock in the shapes of the liquids. The shapes are dictated using external forces to generate arbitrary shapes or to use all-liquid 3D printing to be able to spatially organize the assemblies.”

The idea for the recent paper came when Zhu, a graduate student at HKU at the time, started pondering the possibility of integrating magnetic nanoparticles into ATPS assembly systems. This would allow them to direct the motion of the ATPS constructs using external magnetic fields, which would produce robotic systems that are ultra-soft, flexible, and can be adapted for specific functions.

“Our paper is the culmination of Zhu’s hard labors,” Shum and Russell said. “Current soft robots are made for materials like poly(dimethyl siloxanes) which are great for flexibility but have limitations, such as the extent to which you can compress them. Functionalizing them with specific chemical functions is important for the capture and delivery of materials, but is difficult. Aquabots overcome these limitations.”

“Aquabots create new opportunities to replicate bio-inspired materials and features, such as dynamic permeability and compartmentalization,” Russell and Zhu said. “The robots are fully aqueous, with water inside and water outside them. They are easily functionalized to be biocompatible, so it is not hard to imagine bio-applications, i.e., within the body, where such constructs could be of use.”

The Aquabot structures were introduced as they are a prototype that demonstrates how they could be assembled. In the future, however, the same process could be used to create more complex structures that can tackle more advanced tasks.

“Our study demonstrates the ability to construct robots and conduct robotic functions based on aqueous fabrication, and inspires the design of similar aqueous robots for applications, such as biomedical micromanipulation,” Shum, Russell, and Zhu said. “Imagine having a simple tubular structure that has imbedded functionality that would allow you to fabricate a specific structure in the body, a self-assembling robot that could have the parts go through very narrow channels into a larger compartment where the soft, flexible parts could then self-assemble to perform a task, then dissembled and removed,”

In the future, Aquabots could open exciting possibilities for numerous real-world biomedical and environmental applications. For instance, they could be used to deliver drugs to specific locations inside the human body, to biologically engineer human tissue, and artificially perform the functions of specific biological systems.

“We are now attempting to incorporate a hydrogel within the assembly of the robots so that we can achieve fully-reversible shape changes,” Shum added. “In our next works, it would also be worth looking into other properties and functions enabled by the Aquabot platform, besides the proof-of-concept mechanical manipulation and chemical reactions demonstrated in the paper. It would be interesting to combine this with other microfluidic and robotic approaches for new applications.”